Why Do I Make the Case for Equitable Partnerships with Local Actors?

Friends and colleagues ask me why I am so persistent in what is referred to as ‘localisation’ i.e. supporting and reinforcing rather than replacing or instrumentalising national/local organisations? Surely, I am asked, I must realise that there have been enough problematic experiences with national and local (non-governmental) actors in crisis situations; we cannot simply fund them and trust they will do the right thing with good quality and financial integrity? And have we not a responsibility for the good stewardship of the money taxpayers and individual donors have given us?

The questions are appropriate and after more than three decades in international cooperation in and on crisis situations, I am not naïve. But there are strong reasons why I will continue to argue that as international agencies we need to support and reinforce, not replace national and local actors – or only in exceptional circumstances and more briefly than is currently the case.

What influences have shaped my current outlook on national and local voluntary agencies?

There are other defining influences or moments: my life being in the hands of my national colleagues while traveling in war-torn Afghanistan or a dangerous Ogaden desert region in eastern Ethiopia and the care they showed for me; discussing together with them as a team how we would deal with politically challenging situations; standing up for my Ethiopian national colleagues faced with racist behaviours of some of my international colleagues (this is thirty year ago; several Ethiopian colleagues subsequently became country directors of INGOs later on, one Undersecretary General in the UN system); listening to the director of a Lebanese NGO about their experiences with international aid agencies (shameful); listening to the personal story of a South Sudanese person who as a child was a refugee in Ethiopia but – after other roles in life – is now director of a respected South Sudanese NGO.

Frankly, it has been the attentive listening to so many nationals deeply committed to doing good in their own societies, that has been the defining experience.

Oh, I know, not all people working in their own contexts do it out of deep commitment for fellow human beings. Of course, I have met those who are just in it for the job, perhaps even the power, and can and will abuse it. But I have seen plenty of that also in people working for international aid organisations, in how they treat national staff and national/local ‘partners’ but also how the organisations operate internally. There are so many stories from international aid workers about bullying, disrespect and disempowerment within their own organisations.

Is this reversing the ‘us’ and ‘them’, with me now portraying all national/local actors as the ‘good’ ones and all international ones as the ‘bad’ ones? No: I have come across the not-so-reliable national/local actors and even a few individuals who loudly demand localisation and decolonisalisation but who bully and discriminate against people of other identity groups. I remember vividly, for example, that as country director of an INGO providing relief to internally displaced populations during an escalating war in Sri Lanka, we opted for direct implementation in Liberation Tigers of Tamil Eelam (LTTE) controlled areas.  The local Tamil organisations could not, indeed, stand up to that authoritarian armed group. As I am vividly aware that most international agencies proclaiming that only they can uphold humanitarian principles such as ‘impartiality’ and ‘neutrality’ will not refuse aid money from a donor who is politically involved in a conflict and will be quick to come up with projects that involve significant social engineering in a society once the violence has subsided. We must not idealise national/local agencies. Neither must we continue with the idealized image of international aid organisations as morally, technically and politically superior.

In any case, after decades of so-called ‘capacity building’ of national/local agencies by international ones, several now with serious track records, you would expect to see a significant number of instances where roles have changed.  Yet national actors point out that there never seems to be a graduation ceremony, they must remain eternal students. And some international agencies are using the localisation agenda as pretext to get more funding for more ‘capacity building’. Who is failing here? I must confess that what comes up in my mind is the argument often heard among the colonial powers by the end of the Second World War, that yes independence of the colonies must happen, but not too fast as they were not yet ready for it.

From operational to systems level

Whereas thirty years ago, I spoke up against racism within the country office of the INGO I was then part of, now I have taken that to a systemic level [1]. Can we have an honest reflection about these beliefs and behaviours of superiority, arrogance and domination, way beyond what is justified by good stewardship for the funds entrusted to us? Do you not feel there is something very authoritarian in these behaviours, at a time when we also complain about weakening democracy and shrinking space for civil societies?

What the international relief sector in particular has been doing is taking bad experiences with national and local actors as the starting point, to build a generalising negative narrative around all of them, that portrays them as a generic ‘risk’, which then justifies an ever-growing machinery of assessment and compliance oversight. Mistrust is the starting point. National and local actors are (almost) treated as guilty until they can prove their innocence. That does not resonate with my experience of so many nationals genuinely committed to bringing something good to their societies, often at great personal risk and costs – including opportunities to have a wealthier and easier life in the public or private sector. That, for me is my starting point. That does not mean ‘blind trust’ – but it is a healthier starting point to get to know each other and each test the commitment, integrity, and trustworthiness of the other. Because I too need to earn their trust.

For a future of inclusion and global coalitions based on solidarity

Finally, there is the future. Listen to the big corporate UN agencies, INGOs (and the ICRC) and their vision of the future is one in which they are multi-billion-dollar entreprises, directly implementing humanitarian safety nets in all major crises everywhere in the world, with national/local actors at best as ‘implementing’ but not ‘decision-making’ partners, at worst as subcontractors. Or with and through their own national affiliates. A few years ago, I explained localisation to an audience of Syrians at the annual conference of the Union of Medical Care and Relief Organisations (UOSSOM) who have seen so many colleagues targeted and killed. I asked them whether, one day in the future when Syrians can rebuild their infrastructure but also their deeply destroyed society, they would like this to be led by e.g. World Vision Syria, Save the Children Syria, Oxfam Syria, Action Aid Syria, etc.? Their answer was a clear no. Just as Western agencies would not want to be instrumentalised by e.g. Chinese, Japanese, South Korean, Kenyan or whatever ‘foreign’ NGO, in dealing with flooding, migration crises, COVID-aggravated poverty, etc. in our own countries.

Nor is this a future I want to see and be part of. It is just a replica of the big corporate private sector companies, which leads to disempowerment, loss of diversity, and extinction of locally grown initiatives (or absorption and subordination in the global supply/delivery chains of the corporates) – in short, everything that is bad in raw capitalism with its obsession with endless growth and market dominance.

My vision of the future is one in which committed and capable national and local actors are taking on more and more roles in their own countries and regions that internationals used to play and get the resources to do so, and more countries handle more aspects of crises with their own collective capabilities. We also need a diversity of strong organisations in global coalitions to help the world, now, deal with acute global problems and threats. That will not happen everywhere at the same speed and equally well. But it is the strategic objective that I work towards, and which the global geopolitical changes taking place today demand.

Is this bad news for the increasingly operational UN agencies and the INGOs, as it means shrinking income for them? No, in fact, it should be excellent news, for two big reasons: First, as they spend less energy and money on doing things that national/local actors in aid-recipient countries are now doing themselves, they are freed up to work on critical issues for the world today: protection of fundamental rights, curbing the booming weapons trade, shifting consumerism to a more circular economy, halting the species extinction, democratic control over the tech giants and the whole surveillance industry, etc. And secondly, because they now can do this as part of global coalitions of capable organisations that are diverse but united by shared values and a common purpose.

That inevitable evolution affects me directly: why should these capable national/local actors contract me? After all, I am more expensive because I live in an expensive place, and increasingly they can find good national and regional consultants and resource persons. That is already happening. And that is how it should be. It also points me back at what I have to offer: If I cost more, my responsibility to provide value-for-money to national/local actors must be higher – as assessed by them. That means I need to continue developing my competencies to be able to continue offering value that is not available in their own environments. That will keep me a valued guest. As I value my hosts. What a great incentive to continue my personal and professional development, with and thanks to people from other societies who also seek to contribute positive change!

Citations: [1]  See GMI Insight 15, 16 and 17 on “From Eco-System to Self. Systems change in the international relief industry. Part 1: Why, why now and for what purpose? Part 2: Operationalising localisation. Part 3: Mindsets, attitudes, behaviours. https://www.gmentor.org/equitable-partnership

For recent blogs in this series check-out:

And many more to come soon! If you are interested in contributing to the series please contact Grace Boone at [email protected]. We would love to hear from you and include your perspective. 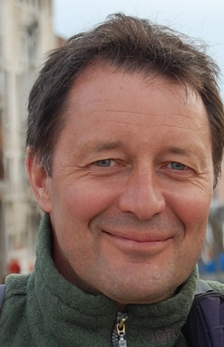 Koenraad for the past three decades has been working mostly in and on conflicts, as a humanitarian actor and peacebuilder. Thematic areas of expertise are conflict- and peace analysis, working with conflict-sensitivity, participatory action approaches and peacebuilding. He likes to zoom in and out, seeing the bigger picture but also the relevant detail, and promotes reflective practices as part of the tactical and strategic navigation of complex and volatile environments.

His roles have included that of programme and organisational manager, analyst, researcher, event and process facilitator, mentor and trainer, evaluator and trusted advisor.

He also works on collaborative approaches, from individual interpersonal skills, to healthy teams, partnerships between organisations and more complex multi-stakeholder processes. He is an experienced facilitator, an accredited partnership broker and trained in Organisational and Relationship Systems Coaching.

As an anthropologist by training he naturally sees himself as a temporary guest and learner in other countries, conscious of his responsibility to bring added value to national actors, as evaluated by them. He is a value-based and purpose-driven independent consultant who has worked with a variety of aid donors, UN agencies, INGOs and national CSOs. For a fuller profile, see www.navigation360.org, and www.gmentor.org. You can connect with him on LinkedIn here: https://www.linkedin.com/in/koenraad-van-brabant/