The quality of a leader: how photography helped me see peers everywhere

Ruth: As you know, this blog series is about new vantage points on “local” in “local leadership”. You understand these notions from many angles because of your career trajectory. And I also love that you have this really important other lens on our work, in the form of photography. I’ve always been curious how you think about that related to your governance and civil society work. That’s not really a question!

Sanjay: [laughing] No, I think it’s really cool because I’ve never gotten to talk about that particular aspect. It was unintentional, but of course it does matter because it adds that extra dimension to how I can work in a community. There’s this development talk that happens at certain levels and that’s how policy-makers take decisions, talking without really looking. So when you’re engaged in capturing that visual aspect, it helps you understand there’s much that can be unpacked and learned. 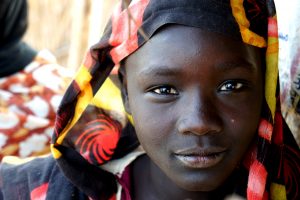 Ruth: When did you first pick up a camera?

Sanjay: Standard 9…Let me just do this math! I’d have been 14. I went to an old school in Kalimpong, founded by Scottish missionariesi n 1900. Being in art classes somehow meant I was automatically in the photography club and the art teacher let us hang around after school if we got permission from home. My aunt used to come and visit during the festival season and she saw how interested I was. So she brought me one of her old film cameras, a Pentax! I found out that taking a photograph of a flower or the mountains got you some appreciation, but if you took a photograph of a person and it turned out well then it kind of made you a little more popular [laughing]. 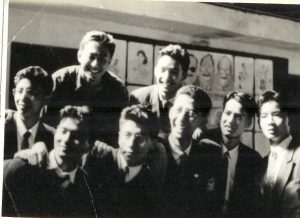 A photo I developed in school, taken in Kalimpong, September 1993. Developed by Sanjay Gurung

Ruth: How has photography evolved for you as you’ve moved through different phases of your education and your career?

Sanjay: At University in the big city of Kolkata, I looked different and felt different from all the other students; I had times when I needed my own space, where I didn’t have to explain myself. I think photography was an escape. And then it was the same when I went back home to Darjeeling after University; it’s the place where you grew up, but you’ve changed so much. Photography actually helped me re-center and think about the work I wanted to do and just cancel out some of the noise that exists. Working for the Government, I continued to take photos in my spare time. Then joining Mercy Corps in 2004 allowed me to travel extensively within the region, to remote areas where I had never been before. It was a time of discovery for me as I learned about the toils of my own people, away from my insulated urban life. Learning more about my people and in the process learning about myself. 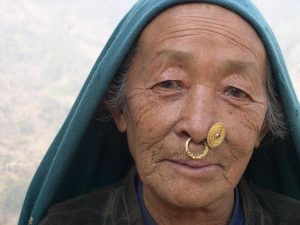 Sanjay (cont’d.): This is where I really started focusing on photos of people as their faces told so many stories. While in Darjeeling I was introduced to Mercy Corps’ global photo librarian, Phil Ottom, who started featuring my portraits in Mercy Corps’ global publications. This was big encouragement for me on many levels. Soon after I was asked to do a short assignment in far western Nepal for a program working on post conflict reconciliation, following the brutal people’s war. This was where I discovered the storytelling power of photos. Each one told the story of pain, loss, the struggle of reconciliation, and hope. 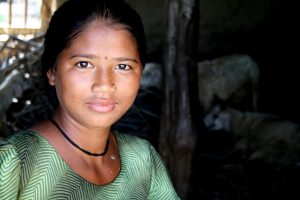 Punita’s photo was made in a village in Dang district, Nepal, June 2007. She had lost her brother to the people’s war but was a youth mobilizer, seeing hope in peace and reconciliation, and moving forward. Photo credit: Sanjay Gurung

Sanjay (cont’d.): When I joined the TSU (Mercy Corps’ headquarters Technical Support Unit), one of the motivations was getting away from a context I was overly familiar with by now. Your capacity to learn and see new things is limited. I remember having this conversation with you. And then my first assignment was in Colombia, a context that I didn’t know anything of – it was daunting. Photography helped this major transition because at the end of the day people are people. What makes somebody happy, what makes somebody sad, what makes somebody fulfilled, what makes somebody want to take an action is fundamentally more or less the same. What better way than a photograph to represent that. And I realized that, no matter what, the work we do is about people. Photography helped me again center myself and, while taking all the things relevant to programming into consideration, maintaining the understanding of our humanity made the work seem possible. 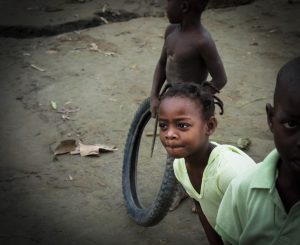 Afro-Colombian children in Quibdo Choco, Colombia. They were very curious about who I was, as I looked very different from the other members in the HQ team. Curiosity is not just limited to the one holding the camera. Photo credit: Sanjay Gurung

Ruth: Is there something that you’re drawn to when taking photographs that helps you understand someone’s role within a community?

Sanjay: Yes. Yes. I think there’s two aspects to that. Everyone has a role in the community. Right? There are leaders and there are people who follow leaders, and that act of following is just as important to how communities work. So if you ask, “what are the things that this individual has that makes them a leader? And what is it that this person has as a follower that makes him or her effective?” At the end it’s more important to understand the relationship of these two working together in order to make things possible. 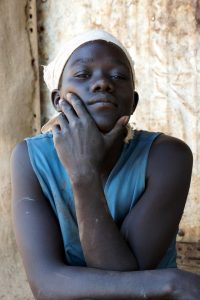 Sanjay (cont’d.): There’s an amazing photograph of a woman in Uganda. She exuded so much confidence. Just looking at that photo, you know that she’s a leader. She was a teen mom, and no one had given her a thought from a programmatic perspective, but she turned out to be the General Secretary of the Local Peace Committee. And when we saw her with the group of youth… it was “beauty”. We have a very mono dimensional understanding of beauty; we say, ‘it’s pretty, so it’s beautiful.’ But there are so many aspects that add up to something being beautiful, like who you are with others and the bigger context. So, thinking like a photographer, trying to capture beauty in context, definitely provides a whole additional perspective for truly recognizing who a leader is and what makes that person a leader.

Ruth: What matters about who makes images of community members and how they are used?

Sanjay: Photography in a development setting is very intrusive and can do harm, no matter who you are. You have to be willing to think about what is taken from and what stays in a community. It is a form of power and you can use it either to share power or to take power away. 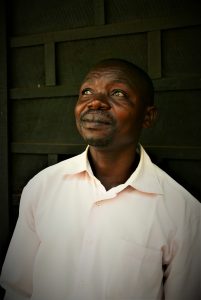 Bukavu DRC March 2018. He is the leader of the local forest management committee and was instrumental in increasing the green cover in his village. Photo credit: Sanjay Gurung

Sanjay (cont’d.): I first learned about non-disclosure forms when there was a visit by a corporate team to our program site in Darjeeling. They just walked around with a bunch of forms and whenever they took a picture they made people sign. In most cultures legalistic processes like these show a deficit of trust. Being sensitive to cultural practices is the most basic principle of building relationships with the community. Above all, like any kind of local knowledge or resource, I think being principally responsible for the photos that you take and making sure they get used in the proper way is about dignity and respect. 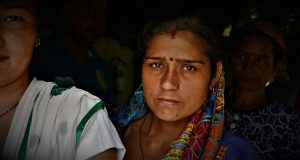 Surkhet Nepal June 2019. These women were the presidents and the general secretary of the local village development committee established as part of Nepal fertilization process. Photo credit: Sanjay Gurung

Sanjay (cont’d.): As my work has taken me to different places, the photographs that I cherish most are the portraits of people where they’re in their most pure element. Doing what they do best truly brings out who people really are…that beauty. Most people love to pose for a photo; there is a level of pride. I have always understood this as a means of giving back in exchange for all the work being done, which brings some level of parity in terms of that relationship between development organization and local leaders. This goes a long way in cementing a trust partnership. It requires an intentional effort, it doesn’t just happen.

Ruth: Sanjay! What a pleasure.

Sanjay is currently developing a book of his portrait photography titled, “Superheros”. A collection of portrait photos from the last 16 and a half years from his work travel from across the world. 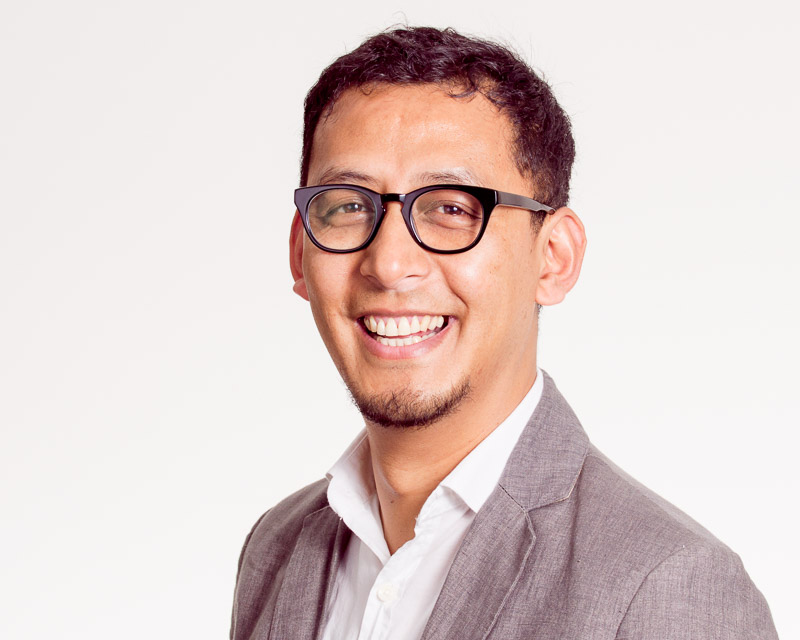 Sanjay Gurung is a Director of Mercy Corps’ Governance and Partnerships Technical Support Unit. He has over 17 years of experience in conceptualizing, designing, managing and monitoring governance initiatives. Having established his career with the Government of India and then as the Program Manager and Executive Director for Mercy Corps in India he has significant expertise in strategic management and leadership and understands first-hand the essential role of good governance in international development. Sanjay’s analytical skills have been essential as he supports Mercy Corps’ governance initiatives in countries as diverse as Mongolia, Nepal, Sudan, Libya, Myanmar, Uganda, Kenya, DRC, Iraq, and Colombia where he has led research processes, evaluation, and assessments at the local, national, and regional levels. Along with his work, Sanjay loves hiking, tinkering/riding his vintage motorcycle, snow leopards, and of course photography.