Note from CDA: From Hong Kong to Bolivia, Iraq to France, South Africa and the Global Climate Strike, people around the world are in the streets to demand change. CDA is keenly interested in the intersectionality of sustained mass protests and social movements and the relationships with inequality, state fragility, and corruption, as well as the mass movement of people, a changing climate, and peace. The Perspectives Blog is a space to share timely thinking about these complex dynamics and personal insights into the unique dynamics of specific contexts. We are particularly interested in voices that shed light on local capacities for peace and positive social change.

Author Ziad Achkar offers a personal reflection on this moment in Lebanon. He is a PhD Student at the School for Conflict Analysis & Resolution at George Mason University in the Washington D.C. area and can be reached at @ziadachkar. The views and opinions expressed in this blog are those of the author and do not necessarily reflect any official positions of CDA.

For over three weeks, my beloved Lebanon has been going through a citizen driven revolution. Millions have taken to the streets to demand a better future for our country and an end to the current regime and ruling class that has governed the country for decades. They have closed roads, organized spontaneous protests around ministries and public institutions, and most importantly, in true Lebanese style, have had fun while taking on the regime. 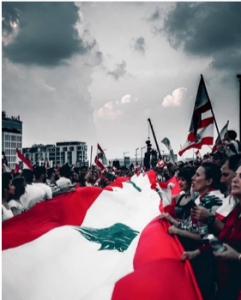 A recent trigger, but not the root cause

What sparked this revolution was a new series of taxes, in particular a law that would have made otherwise free technology for connecting across the country and around the world, such as WhatsApp, Facetime and other Voice over Internet (VOIP) a paid service. The root causes and grievances however run much deeper. Decades of corruption, piling up debt, environmental disaster, rolling electricity blackouts, poor infrastructure, and mismanagement of funds have left the country in economic disarray. Lebanon’s amassed debt is now 150% of Gross Domestic Product. Concerns over liquidity and the stability of the Lebanese Pound pegged to US dollar have added new layers to these grievances. Then, the week prior to protests erupting, some of the most severe fires in our country’s history destroyed thousands of acres of forest and risking public safety. Citizens drew connections between the government failures that allowed the situation and their more immediate fears. 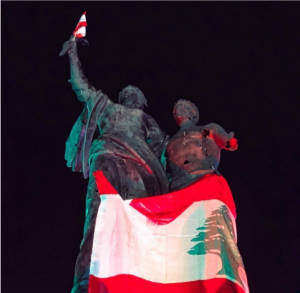 A unified voice for change

This is the breaking point. The people have had enough and for the first time since the end of the civil war in 1990, people from all around the country, from all socioeconomic and religious backgrounds have come together, in one voice, to say enough. Tired of this ruling regime and political class, and knowing that the country and nation can do better, protestors have demanded the formation of a transitional government made up of technocrats and specialists. The goal being to navigate the economic and financial crisis that the country is facing and impose much needed reforms. Moreover, the protestors demand early parliamentary elections be announced under a non-sectarian electoral law that would allow people to vote for the most competent candidates rather than vote for people based on their religious sects. 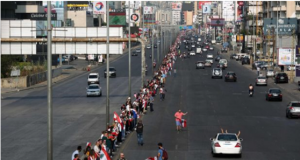 What the future holds remains unknown, but what is certain is that a return to the status quo is not possible. This time around, there is something special about this movement, it is different than any we’ve seen in the past. The revolution has been entirely civilian-led, leaderless, spontaneous and creative in how it is galvanizing the population. The revolution has targeted every major political party in the country and blamed them for the current state of the country. Crucially, this movement has taken place all over the country and is not simply concentrated in the capital, reinforcing the fact that as Lebanese we are united by our grievances and concerns. The people have so far managed to reject the language of division and sectarianism that has divided the country for so long and it is a testament to this movement. 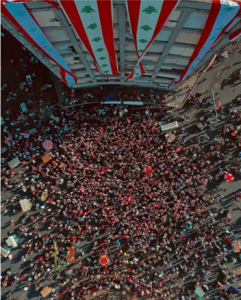 Watching, advocating, and supporting from afar

For many of us overseas who are Lebanese, we can only wish to be there on the ground, to be by the side of our fellow citizens, protesting in the streets and against corruption in our public institutions. We have been glued to our screens since October 17, following new developments and attending local protest rallies in cities around the globe. We have been mentally and emotionally there with you all and are spreading the word about the revolution to our colleagues and local friends, making sure foreign media is not mischaracterizing or misrepresenting the true nature of this peaceful revolution.

It certainly has not been easy watching from thousands of miles away, wishing we could be there with our fellow citizens. For many of us the grievances and concerns that our people are articulating are the reasons we left the country in the first place. Concerns with corruption, lack of economic opportunities, and sectarianism have driven away hundreds of thousands of young Lebanese over the past decades in the pursuit of opportunities. Today, we look with great hope that this revolution will be a turning point towards a Lebanon we have always heard about but never got to witness, a Lebanon that was the Paris of the Middle East. 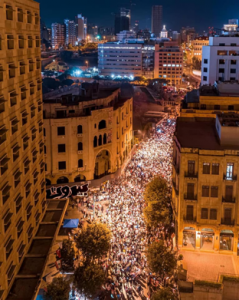