Use the systems maps below to follow the police and judicial officers’ experience of corruption in the precincts and courts of Northern Uganda.  These maps, based on research conducted in Gulu and Lira in early 2016, explain what drives their behavior, what enables it, and the relationships between these factors.

In survey after survey, police in Uganda are consistently ranked the most corrupt state institution, with the judiciary following in the top three.  Crime such as theft, burglary and robbery are experienced by a large swath of citizens, particularly those in vulnerable groups and rural communities; while corruption has proven to be highly resilient.  According to the 2013 Transparency International Global Corruption Barometer for Uganda 55% of respondents felt that the level of corruption had increased a lot over the past 2 years.

The third in our Northern Uganda series follows the police and judicial officers experience of corruption in the criminal justice system (CJS). Based on research conducted in Gulu and Lira in early 2016, we used systems mapping to explain what drives their behavior, what enables it and the relationships between these factors. [if you are new to systems mapping, we recommend you read “How to Read a Systems Map” before continuing]

In Northern Uganda, bribery is at the heart of the corruption system that is part and parcel of the criminal justice experience.  Our research uncovered two different sets of dynamics that feed this vicious cycle; one set of dynamics that drive citizens to engage in or accede to corruption, and another set driving police and judicial officers’ behavior.  Below, we try to make sense of the latter. 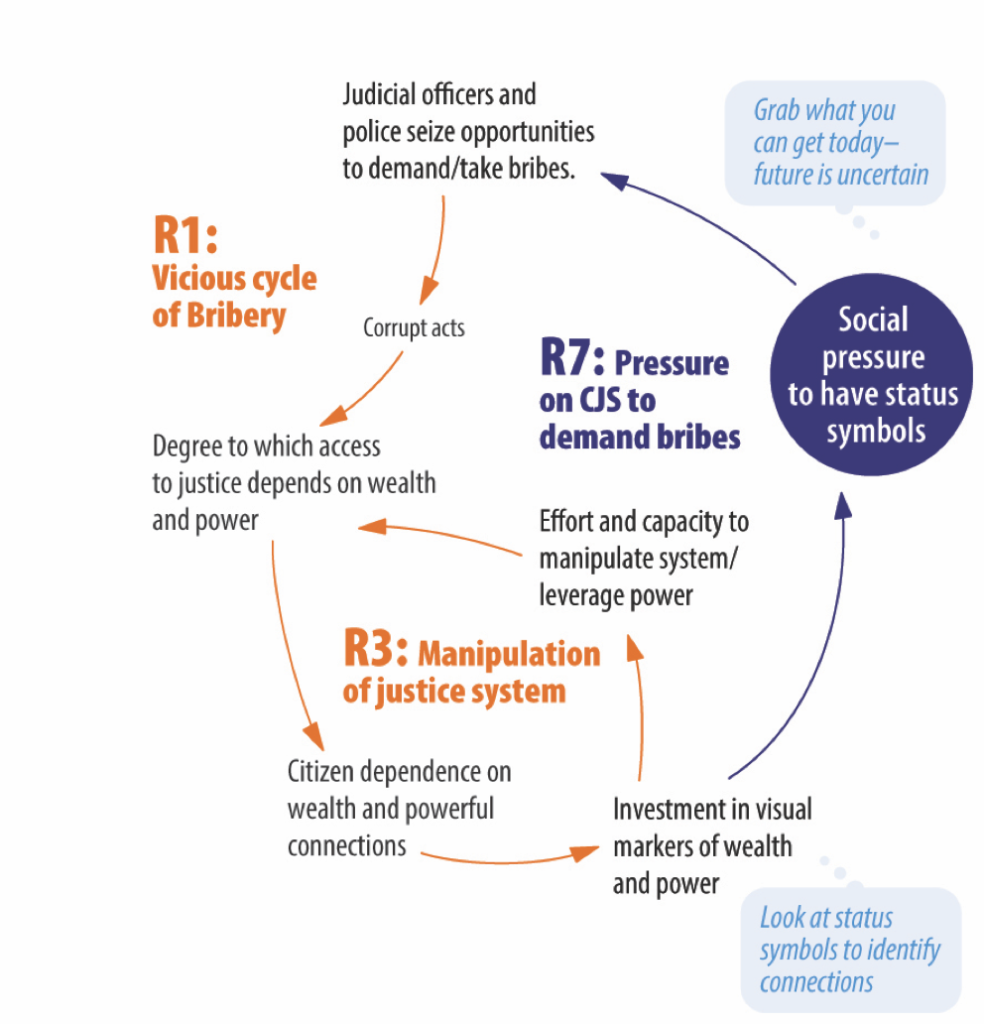 Police and judicial officials experience significant social pressure to own or display status symbols which reflect the power of their position.  Our research found that magistrates and police experience particularly sizable social pressure from their family and communities to live up to expectations. Cars, clothes and a house (and ideally big weddings and funerals as well) all offer signals of success that are deemed necessary to garner respect from one’s community.   Notably the lack thereof (i.e. not accumulating visible markers of success regardless of one’s legitimate means), results in ridicule often from those closest to the individual.  Many people talked of a general mentality of “grab what you can today”—accumulating wealth quickly—that has been, in part, a response to general uncertainty about the future.   This pressure to have status symbols as indicators of personal success —whether for magistrates or for citizens who use them to gain influence in the justice system to pursue their cause—fuels the perpetual cycle of bribery. 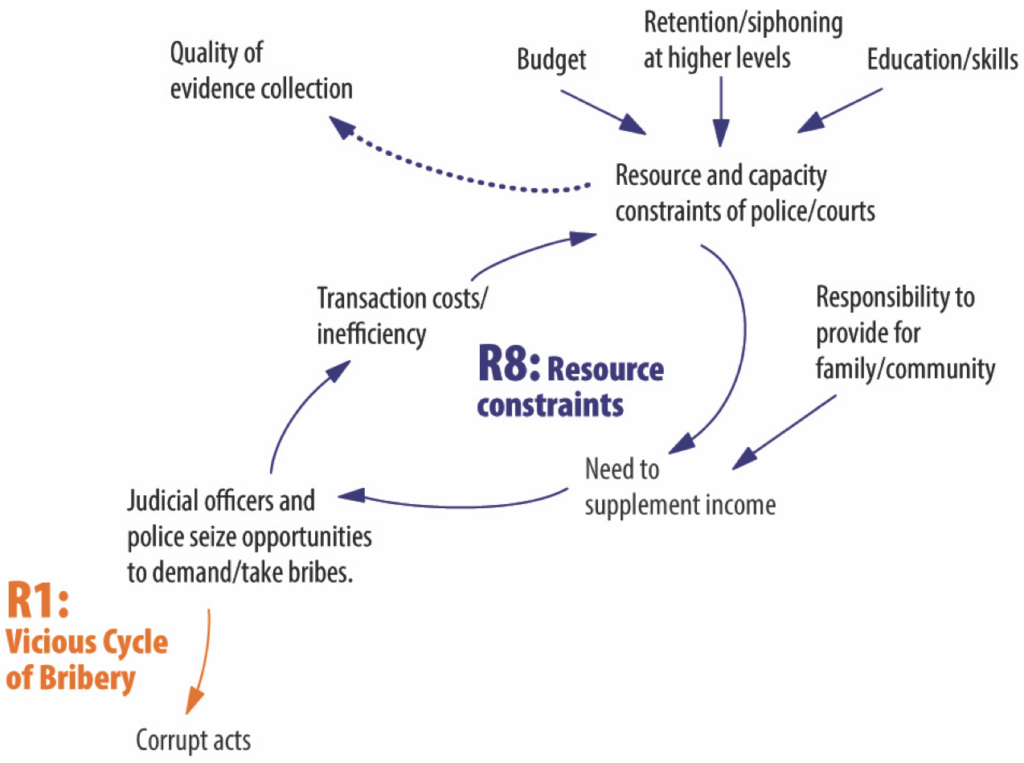 Resource constraints include material infrastructure (e.g. supplies, equipment and fuel) and staff competencies (e.g. inadequate knowledge of proper evidence collection procedure or the law). Mainly noted in relation to the police, these constraints create incentives for bribery and challenges to prosecuting cases. For instance, a legitimate lack of fuel generates a ‘fee for service’ request that often gets topped up to benefit the police officer. When such constraints lead to a flawed investigation or poor quality evidence, the resulting acquittal is also perceived as corruption (see: “citizens perceive all justice must be bought” in Three Lessons About Corruption in the Police and Courts in Northern Uganda) 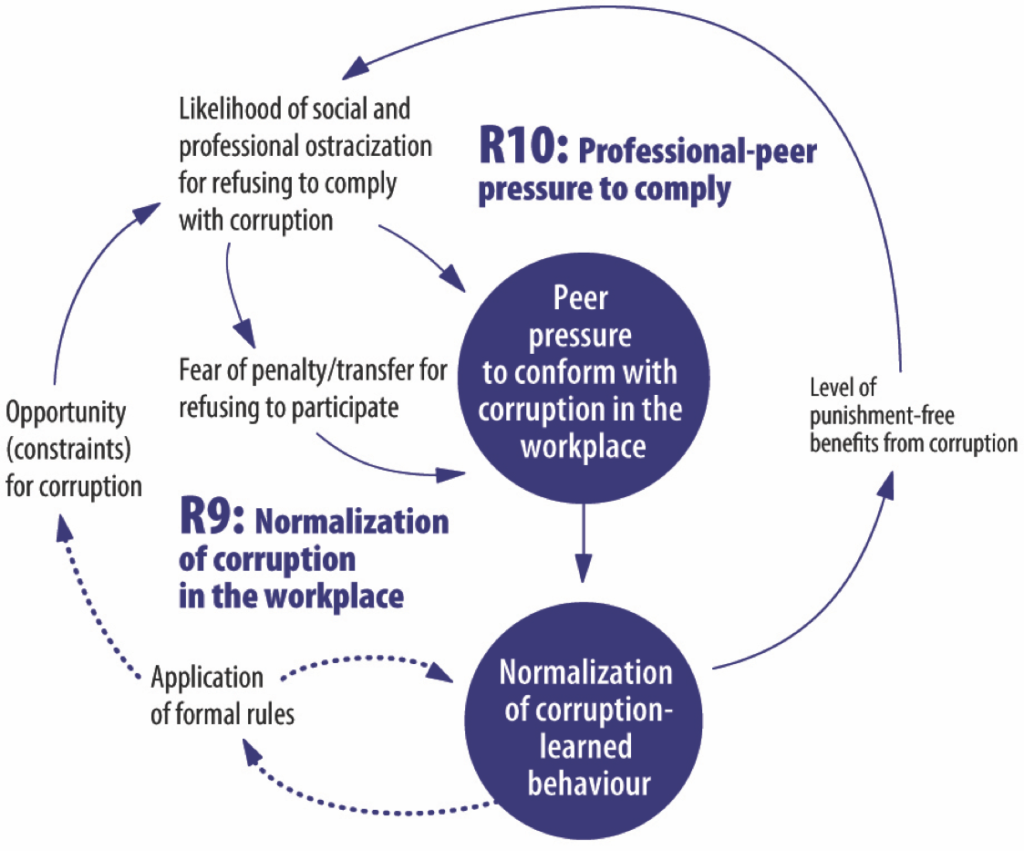 Corruption has become so habitual among the police and judicial officers that it is now considered normal behavior. Implicit peer and professional sanctioning systems have developed over time to ensure that people do not deviate from this “norm.” For example, police or judges who refuse to engage in corruption may be ostracized personally and/or suffer professional consequences (e.g. being transferred). The sanctioning systems strengthen the normalization of corruption, undermine the strength of formal rules (including rules against corruption), and increase opportunities (and behavior) to demand bribes. 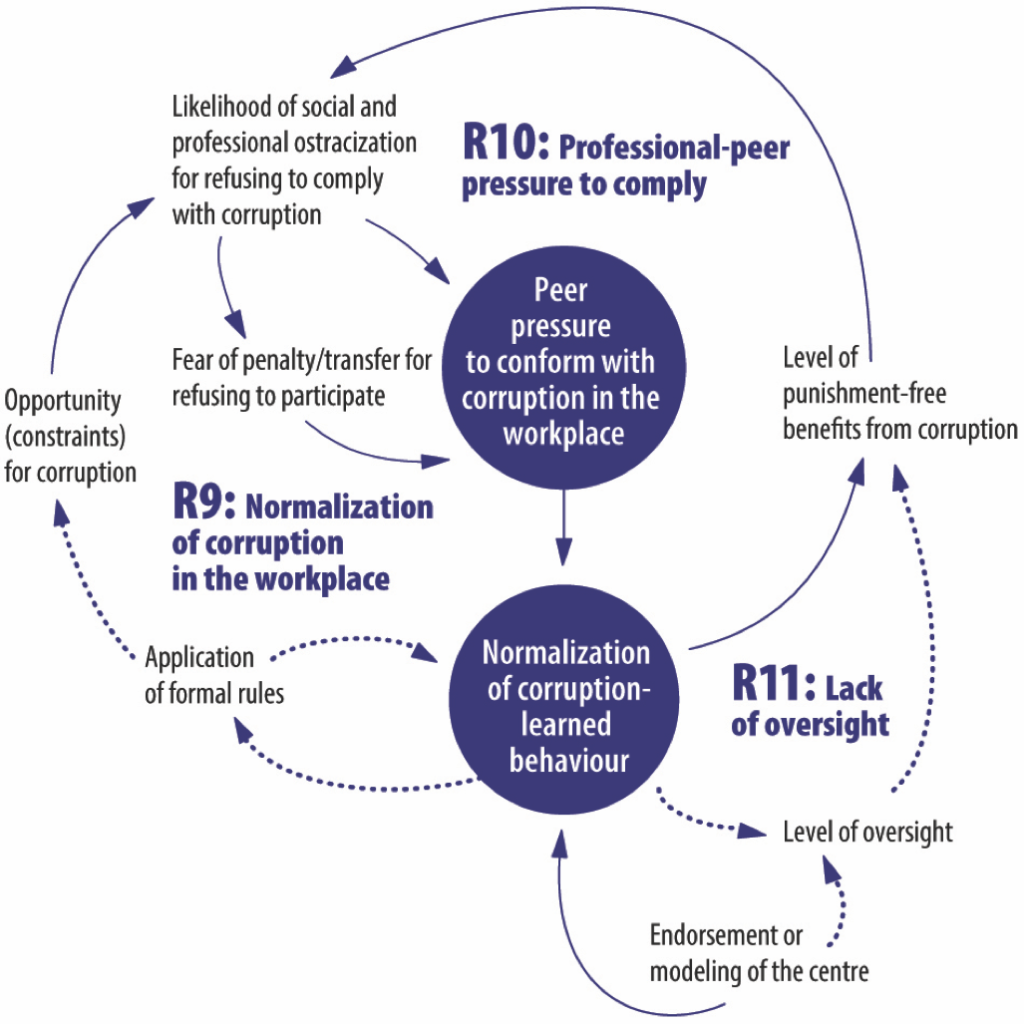 Scant oversight weakens the formal rules that should constrain corrupt behavior. Incentives to provide oversight are limited because all levels in the hierarchy—even at the level of the regime itself—are participating in some form of corruption, and it would not be in their interest to pursue an agenda of control or transparency.  Unlike in other countries, the participation throughout the hierarchy is not vertically integrated; meaning in the criminal justice sector money does not flow up and power down.  Rather each level operates to maximize its own advantage and that behavior is seen as a model; legitimatizing these behaviors at lower levels.  Without oversight (and senior officials modeling these practices), opportunities for corruption are capitalized upon without concern. 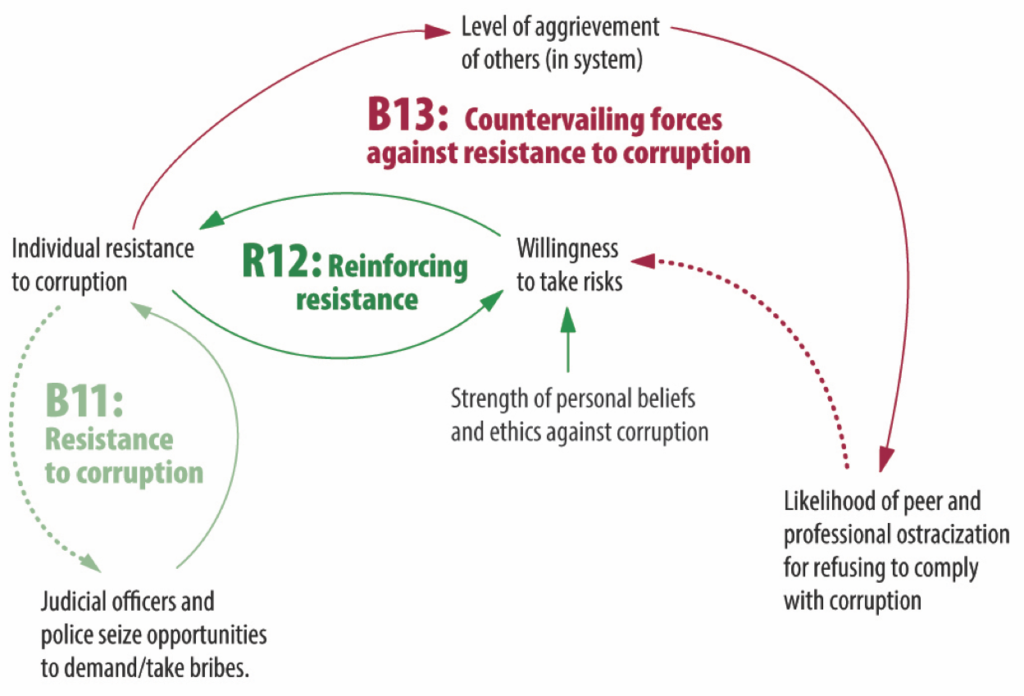 Respondents external to the CJS spoke with great respect of people within the criminal justice system who were not corrupt. These people take personal risks in order to step out of the expected pattern of behavior, namely, corruption. This stance comes at a social and professional cost to many.   It is possible, that the ability to resist could serve as a limiting factor for bribery, keeping it to implicitly understood ‘reasonable’ levels.  However, only weak evidence of such was found. Its worthy of note that our research found no examples of citizens resisting corruption without external support e.g. legal aid; except in cases where they simply had no ability to obtain the required funds.

The System Of Corruption 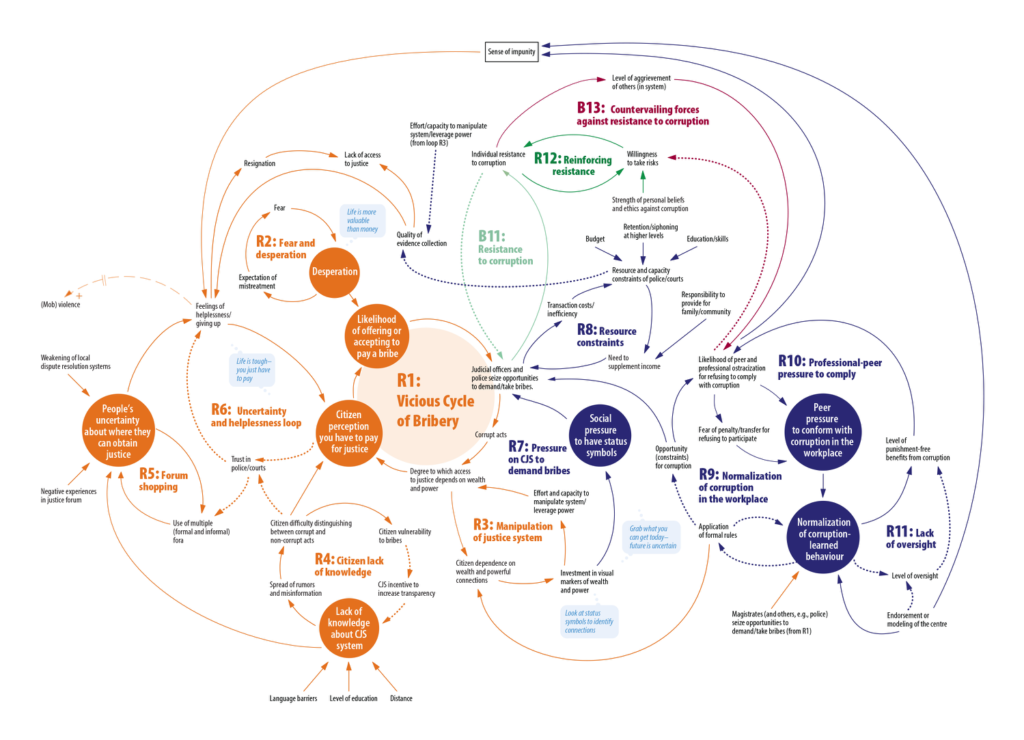 The full corruption systems map shows how bribery is the central anchor of the system.  The left side, depicted in orange, demonstrates how the citizen demands feed that vicious cycle.  While the right side, depicted in purple show how the police and judicial dynamics fit into the system.

How These Maps Inform Action

The causal loop map above may be used in a number of ways, depending on where you are in the life cycle of an intervention. It:

If you are leading an intervention in Northern Uganda we will be interested to hear if this map resonates with your experience.   Please comment or email Kiely Barnard-Webster at [email protected] to get in touch.

Do you have favorite resources on corruption and systems?  If so, please send us your recommendations. Kiely Barnard-Webster at [email protected]

What is the Corruption, Justice and Legitimacy Project?

The Corruption, Justice, and Legitimacy (CJL) project advances systems approaches to corruption analysis in fragile and conflict-affected contexts.  Focusing on the CJS, the project supports more holistic efforts to diminish corruption in core state activities related to human security.  The work is built on the premise that corruption is a complex adaptive system. Building upon prior research for the U.S. Department of State Bureau of International Narcotics and Law Enforcement, the CJL project puts policy makers’ assumptions about corruption’s effects on state legitimacy to evidential tests.  This project is one of four projects funded by the Carnegie-funded project and convened at The Institute for Human Security at the Fletcher School. 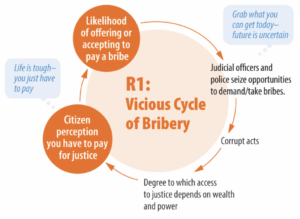