Uganda has almost every institution, law, procedure, and body that one expects to find in a robust criminal justice system, as well as an impressive array of anti-corruption laws, institutions, and initiatives.  Despite this strong framework, corruption in criminal justice proves to be robust and resilient in Northern Uganda, with bribery at its heart.  This week we look at one set of dynamics that feed this vicious cycle; the people’s perspective.

In Uganda, corruption studies, annual indexes, investigative journalism, and citizen reporting are ubiquitous. Yet the enablers and drivers of corruption and the way those factors interact have received little attention.  Social change actors targeting corruption need to understand how the system of corruption operates as well as the functions that corruption serves in order to develop contextually-specific, effective interventions.

The second in our series tells the story of the citizen experience of corruption in the criminal justice work of the police and courts in Northern Uganda [read part one of the series here].   Our work conceptualizes corruption as a complex adaptive system driven by interrelated and reinforcing enablers and drivers.   Using causal-loop mapping to visually depict the system, this abbreviated summary is drawn from  Facilitation in the Criminal Justice System in Northern Uganda.

Uganda has almost every institution, law, procedure, and body that one expects to find in a robust criminal justice system, based on English common law and customary law. Similarly, the country has an impressive array of anti-corruption laws, institutions, bodies, and initiatives, such as the Anti-Corruption Court, the Inspectorate General, and the Data Tracking Mechanism.  Significant anti-corruption initiatives specific to the police and courts also exist.  So much so that in 2011, Global Integrity gave Uganda a 98/100 (very strong rating) on its legal framework.

Despite the robust framework for anti-corruption the administration of justice and rule of law remains uneven across the country. The same Global Integrity 2011 report gave implementation of said legal framework a 51/100 or a ‘very weak’ rating. As the Inspector General, Irene Mulyagonja Kakooza notes, “despite this strong framework, corruption remains a menace in our society.” Examining the drivers, enablers and their interactions is key to understanding the resiliency that corruption has shown in this context.

In Northern Uganda, bribery is at the heart of the corruption system that is part and parcel of the criminal justice experience.  Our research uncovered two different sets of dynamics that feed this vicious cycle; one set of dynamics that drive citizens to engage in or accede to corruption, (‘the people’s perspective on corruption’) and another set driving police and judicial officers’ behavior. Today we will examine the former using a systems map. [see ‘reading-a-systems-map‘]

Before we can understand the people’s perspective on corruption we must examine what is at the centre of the system; bribery. 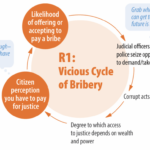 It is a self-perpetuating vicious cycle at the heart of the way police and courts function in Northern Uganda. Judicial officers and police, driven by a variety of factors, are poised and pressured to seize opportunities for bribery.  This feeds the reality that justice is influenced heavily by money and power as well as the perception among citizens that justice is always for sale. Yet this very perception leads citizens to accept and even anticipate bribery (i.e. pay before there is even a demand for payment), reinforcing the very phenomenon (officials’ demands for bribes) that is so heartily disliked.   One interviewee summed up this sentiment, “Many times, if you do not pay you will not receive the service you need. You are aggrieved and you become a secondary victim because the duty-bearer did not respond to the crime.” 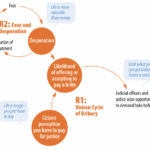 People acquiesce to demands for payment and proactively offer bribes because they fear the consequences of being trapped within the criminal justice system. As one person explained, “[police] do everything possible to make people fear them, they do anything to get what they want.” Citizens believe that they or their loved ones will suffer dire consequences if they come into contact with the criminal justice process; specifically physical abuse by police while in custody or in prison. This has led to the common refrain “Life is more valuable than money” which out of desperation justifies any action, most commonly paying, to see someone released. 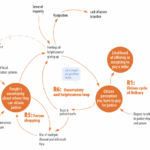 The perception that justice is for sale creates tremendous lack of trust by citizens in the police and courts as state institutions. This often drives them out of the formal system; seeking justice from other formal or informal mechanisms such as traditional leaders or Local Council Courts which do not have criminal jurisdiction. Having multiple possible paths contributes to a pervasive sense of uncertainty about where one should go to obtain justice.   This forum shopping undermines the credibility of the criminal justice sector.  It also contributes to an overall sense of helplessness in the face of a crime and often results in citizen’s giving up (e.g. dropping cases).  This can contribute to an increase in violence and in particular mob justice as well fueling the use of corruption to achieve one’s ends via the formal system.   Together this creates systematic barriers to accessing justice. 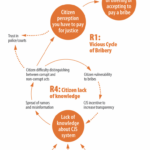 Citizens do not know the laws and procedures used by police and criminal courts and often possess erroneous beliefs of what these are supposed to happen.   The primary source of information when faced with a criminal justice crisis is one’s social network which makes this misinformation and rumors exponentially powerful.  The lack of accurate information makes citizens vulnerable to manipulation by police and judicial officers whereby they become complicit to a corrupt act without knowing it.  It also can lead citizens to characterize all inefficiencies and negative experiences (e.g., delays, acquittals, etc.) as caused by corruption.  In turn this reinforces the perception that justice is for sale, and the likelihood that citizens will participate in bribery. 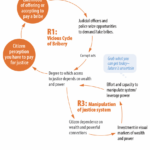 Manipulation of the justice system for personal gain is real.   Used in both predatory and protectionist manners; wealth and powerful connections are capitalized upon to get favorable outcomes. “Godparents,” or significant relationships with powerful people, are key to access and navigate the system for citizens.  They are also used by those within the system as a form of protection. This deepens the dependence of justice on wealth and power, and strengthens the vicious cycle of bribery.

Next week I will share the judicial actors’ perspective on corruption in the police and courts in Northern Uganda which will complete the systems analysis.

What is the Corruption, Justice and Legitimacy Project?

The Corruption, Justice, and Legitimacy (CJL) project advances systems approaches to corruption analysis in fragile and conflict-affected contexts.  Focusing on the CJS, the project supports more holistic efforts to diminish corruption in core state activities related to human security.  The work is built on the premise that corruption is a complex adaptive system.  Building upon prior research for the U.S. Department of State Bureau of International Narcotics and Law Enforcement, the CJL project puts policy makers’ assumptions about corruption’s effects on state legitimacy to evidential tests.  This project is one of four projects funded by the Carnegie-funded project and convened at The Institute for Human Security at the Fletcher School. 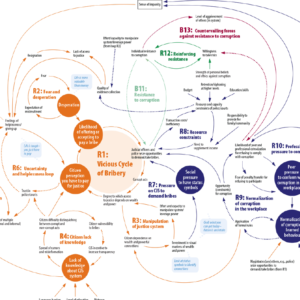