Land and water disputes have long shaped conflict dynamics in the Asia-Pacific, the most disaster-prone region in the world. Resource pressures, increasingly impacted on by extractive industries and climate change exposure, are feeding into these dynamics. Climate change induced migration is starting to show its effects on social cohesion, and climate mitigation. Measures or lack thereof by international actors and governments is already producing friction.

The Asia-Pacific region is  rich with initiatives that strengthen the cohesion and resilience of social and natural systems. Judged by the sharing and outcomes of the conference, environmental peacebuilding in the Asia-Pacific region is not only richly diverse, but the application of environmental peacebuilding offers instructive avenues to maintain and strengthen the security of its human and non-human inhabitants.

Violence in the Anthropocene

A wide array of concepts were used to denote the complex multivalent risks that emanate from climate change, mass extinction, and the rapid non-linear changes in socio-natural systems they generate. Ecological, cultural, ontological, even spiritual security didn’t quite capture the entirety of these threats by themselves. No narrow definition could encapsulate the kinds of losses inhabitants of the region are already experiencing. In the ontologies of particularly the Pacific Islands, land is people, and people are land. They are non-divisible. When land is lost to the ocean, ancestral connections to the past, prosperity of future generations, culture, ritual, livelihoods, and customary knowledge is lost. This kind of man-made destruction of land and sea, with its devastating cultural and social impacts, has a particular history in the Asia-Pacific. Here the Anthropocene seems to echo the colonization of the region. And the answers to the kinds of peace and security we are striving for as peacebuilders in the Anthropocene then also lie in part in relational ontologies and rejections of colonial epistemologies.

What kind of Peace?

Environmental peacebuilding, like other fields of practice that emerged in the context of the climate crisis, demands a collapsing of the cartesian distinction between society and the environment. To reject the anthropocentrism inherent in the liberal peace of Western peacebuilding practice, means that positive peace in the Anthropocene needs to be inclusive, relational, holistic and multi-scalar. It needs to address the wellbeing of socio-natural relations, and strengthen these relations to make them more resilient to social and environmental shocks. Across the Asia Pacific, customary knowledges and practices are key in building more resilient socio-natural relations.  But these knowledge’s and practices can’t be idealized, and are not always equitable, especially when it comes to gender. Still, it is imperative to reverse colonial power relations, and make indigenous knowledge and social structures central to peace processes in more than a tokenistic manner. Rather than only building the capacities of indigenous peoples to engage in peace processes, peace processes themselves need to change to adopt indigenous relational ontologies and epistemologies in the Anthropocene.

Practice too reflects the demand to think beyond traditional peacebuilding approaches to include new methods, actors, and scales. The theory-practice gap is still vast in the field of environmental peacebuilding. The macro approaches developed for peacebuilding processes so far are not able to provide the frameworks to hold small-scale, often low-level simmering conflicts 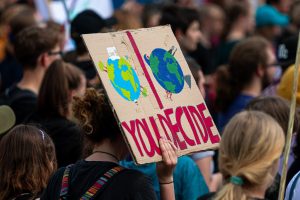 that climate change impacts in the Asia-Pacific. In the absence of concrete models and guidelines, principles of collaborative, and comparative learning at various scales, local approaches, and careful preventive work is key. Reflective, contextualized peacebuilding that involves recognition and reflection, before it responds to conflict must be the norm. Under these circumstances sustainable livelihoods projects can become an essential part of the peacebuilding toolkit. Migration will have to be taken even more into account, and in a region where knowledge and identity is based on location, knowledge and identity will have be rebuilt in new, often urban settings. New alliances need to be forged, as environmental activists, disaster response and recovery practitioners, development workers, and peacebuilders increasingly need to work together to address and prevent negative impacts from climate change. All responses need to be anchored in local communities, but they increasingly need to think of planetary scales, and solidarities across localities and scales. Governance interventions that address human and non-human communities needs to be reassessed, to include not only state institutions, but customary structures, religious institutions, businesses, extractive and other industries. All these approaches need to be gender sensitive, because the climate-conflict-gender nexus is still ill-understood, but emerging evidence suggest detrimental effects for women and girls in particular. Finally, as peacebuilders we have to take more heed of the psychological effects of climate change and the losses, anxiety and trauma that emanate from it.  Working with youth, and empowering youth will be key here.

The Geopolitics of Environmental Peacebuilding in the Asia-Pacific

Already, the greatest threats in the Asia-Pacific region today—COVID-19, cyclones, floods, and fires—are non-traditional ‘security’ threats. Yet so far, most governments (still upholding militarized security) in the region disregard and underestimate their impact on security. The politicization and minimization of these experiences and risks deny many their realities and the existential threats necessitating the primacy for other countries especially in the Pacific.  The systemic nature of climate change, the multiple mutually reinforcing, simultaneous, cascading events will have a far greater impact on the region that is currently discussed in political discourse. Again, what is needed here is a whole-of-society approach, a reinterpretation of national and regional securities to include human-ecological security that acknowledges and addresses the climate crisis, biodiversity loss, health, and the integrated structures of harm that emanate from them. Paying attention to these kinds of environmental risk factors can result in new kinds of politics and alliances even in some of the most protracted conflicts in the world, as the hydro diplomacy between India and Pakistan demonstrates. Australia in particular has disappointed with inertia and a lack of vision when it comes to climate diplomacy. It has retreated from the regional political stage, and that despite the fact that the region is one of the most vulnerable in the world. Australia and its politicians have to cede servitude neoliberal extractive capitalism, which generates the largest coal exports in the world, and take an active role in the climate diplomacy of the Asia-Pacific region. Extractive capitalism also undermines democracy and feeds into land and governance conflicts across the Asia-Pacific region, as most recently the riots in Honiara in the Solomon Islands attests to.

Given the rich experiences of environmental peacebuilding in the Asia-Pacific, there is a strong impetus to further research, practice and cooperation on the topic.  More academic research and substantive regional case evidence is required. But even more so, participatory action research that would enrich and broaden environmental peacebuilding practice is needed. Practitioners need to carefully deliberate and pilot what truly inclusive, relational, holistic and multi-scalar peacebuilding might mean in each locality. Finally, new alliances and solidarities need to be built within the Asia-Pacific, and across the world with other regions, so that we can learn collaboratively and comparatively from small places to address some of the biggest issues of the 21st century.

Photo by Dominic Wunderlich from Pixabay